started a topic 3 months ago

Perhaps the addition of keyword "sets" before the first word in the list is a new feature (I don't remember it when PM+ was first introduced).  I would like to know

1. How do I disable this feature if possible?

2. Suggest you eliminate it or at least make it selectable in Preferences.  While I have OCCASIONALLY found it helpful, I find it gets in the way more often than not, as when attempting to add one of the keywords that is at the head of the "set" it replaces all the work I have done with that set! [Yes, i see that can be reversed with "Cmd+Z" but then the only way I can add a word toward the end of my long list is scroll down -- or guess @ typing the word in manually.  I find the feature slows me down more than it helps.  -Just a suggestion (and maybe I don't understand the feature and how it works!? - Jon Davidson

I'm not quite clear on which feature you're talking about. Is there any way you could post a screen capture?

Thanks, Marziah.  Since screen capture caused the pop-up window in the Keywords field of IPTC metadata to disappear(!), i had to take a photo of the screen with an old fashioned camera which delayed me a bit.  I am trying to learn the use of Affinity in place of photoshop and don't yet know how to descreen so hope you can see that to which I refer: 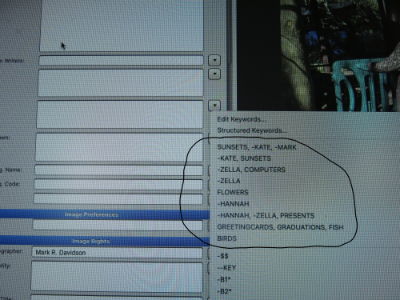 What I am referring to is the groups of keywords i have used in previous keyword fields during a session. (the grouping I refer to precedes my first keyword : "-$$" and is set off by horizontal lines which may not show in the image above)

If i try to ONLY add the keyword which is the first keyword in a group, to a new image, it replaces everything i have already put in the keyword field with the group of keywords from that saved grouping at the top.  My keyword list is too long to search manually so i just try to remember the spelling and type it in.  That's not cool!  What do you suggest?

Ok -so you're selecting the group of keywords from the recently used list, and it's adding them all together. But you need to be able to find single keywords faster from a long list and do not have time to scroll or go to the edit keywords dialog every time. Correct?

I think your answer is using the Autocomplete settings. That way you'd just have to type a few letters and it would start suggesting matches until you had the correct keyword. Let me know if that helps or if I'm still misunderstanding your request.

No, Marziah, I guess I am not being clear;  Here is the process:

2) I click on the "I" to open the Metadata window for the first image.

3) I click on the arrow next to keywords which opens my stored keywords list.  It lists "Edit keywords," "Structured keywords" and then after a horizontal line,  my keyword list (begins with "-$$")

7) When I open the keyword list, there is now a new additional group composed of the set of keywords i just entered on the last image, followed by a new horizontal rule and then my keyword list.  IT IS THIS GROUP I WANT TO ELIMINATE OR CHANGE IN PREFERENCES SOMEWHERE

AS I DON'T WANT IT TO APPEAR!

If I now for the second picture want to assign "-CORE, BILL, HARRY, LYNDA, FRIENDS, " the instant i type "-CORE," the application REPLACES everything that was already in that 2nd image Keywords field (say: "FLOWERS, LAKES, TAHOE, SPRING, TREES, ELIZABETH") with the same group as that in the first image because it first picks up that group automatically.  THEREFORE I LOSE ALL THE KEYWORDS THAT WERE PREVIOUSLY ADDED TO AN IMAGE WITH ANOTHER GROUP ONLY ONE OF WHICH I WANTED TO ADD!

I can see where a professional photographer would find that feature helpful as he/she is assigning keywords to similar images in which all the keyword fields are initially blank.  However, for those of us who are working with catalogs of many previously labeled pictures, this is both annoying and potentially destructive as those older keywords may have taken some efforts to select, and they are instantly lost.  So:  MY REQUEST IS THAT THE FEATURE OF KEYWORD SETS BE EITHER REMOVED OR PUT IN THE IPTC PREFERENCES TO BE SELECTED OR NOT.

Hope I am a bit clearer.  Thanks for asking for clarification. - Jon D.

Ok. That does't seem like it should be happening. I'm going to refer this ticket to support. Someone should be contacting you soon through the email you used to register.

Just to keep you updated, I've filed this as a bug report. I'm getting the same behavior, and it does not seem intuitive to replace the existing content instead of adding to it.

Update - we're going to see if this is an issue for other people as well. If you use the recently used items and would like to see this behavior change, leave a comment or upvote the suggestion. Thanks.