Variables in Photo Mechanic are placeholders for metadata information contained in a photo.

For example, {filename} is a placeholder for the actual filename of a photo, so the value of the {filename} variable will be different for each photo.

Variables can contain metadata automatically created by your camera, such as the aperture setting, or it can contain information that you have added, such as the User/Client variables or a color class or star rating. Variables create a powerful way to automate your workflow by using variable placeholders for tasks such as batch renaming files during ingest or adding captions or other metadata fields.

When ingesting photos, one common way to use variables is to automatically rename files. This example uses the {date} and {seqn} variable. Using underscores between words instead of spaces in this example is an optional way to keep web-friendly file names.

If the photo being ingested was shot on Halloween 2019, the final file name would end up being MK10-31-19_CraterLake_0001. The next photo would be MK10-31-19_CraterLake_0002 and so on.  The variable information comes from the short date stored by the camera and the sequence variable. You can change the starting number and method of counting by selecting the Set {seqn} var... button in the ingest window.

You can use variables in most text fields within Photo Mechanic.

Photo Mechanic variables are structured inside curly brackets {} and contain only the metadata within the variable, so if you are using variables to add captions, for example, you may want to add spaces and between variables, such as:

When renaming a file, you may wish to add underscores _ rather than spaces to separate fields, such as:

If you know the name, you can type it in full, including the curly brackets {}. You can also use the Variables... button to bring up a list of all variables. Double click on the name of a variable within the box to add it to the selected text field.

Here is a list of Photo Mechanic variables, but you can also find this information in-product. Select the Variables... button, and the Variables window will appear. Select any variable for a description of the data it contains. Double-click to add that variable to your currently selected field. 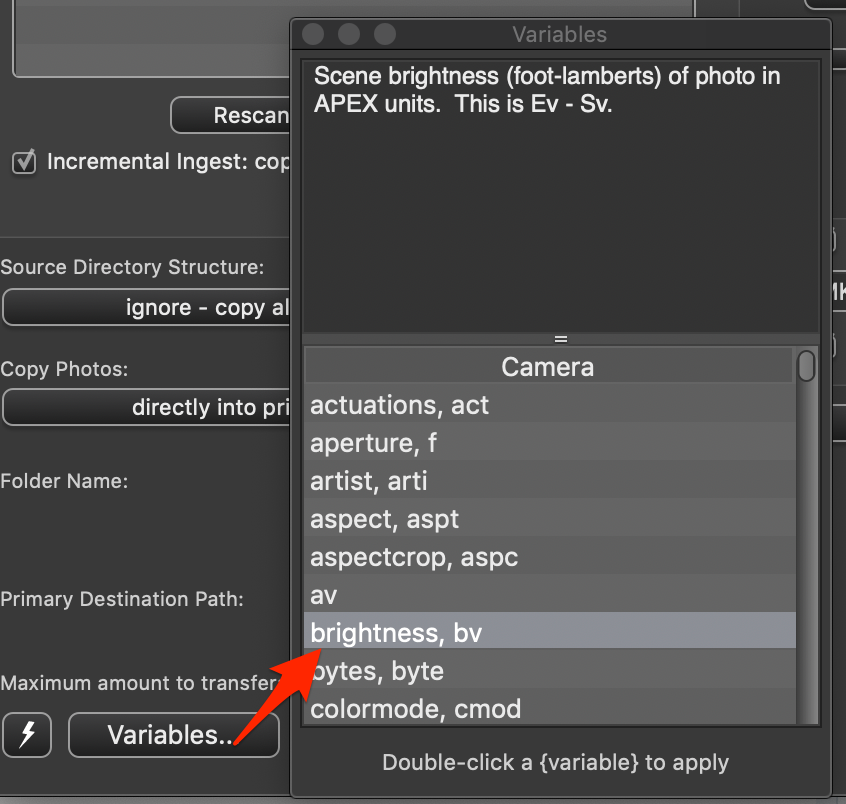